Marti Hunter hates rockers and anything remotely related to the rock-and-roll lifestyle. She thought she’d left that all behind, along with her drug-addicted mother and absent-minded, rock legend father. Now she lives with her grandmother, and Marti’s life is finally normal. Just the way she likes it.

For Adam Jamieson, normal is not possible. He is the genius guitar player of the band Jamieson. He’s ecstatic to finally get a two-week break from his micromanaged life and a chance to hang with regular teens. Adam’s shaving off his trademark curls and going undercover.

But when Marti, the reluctant rock princess, and Adam, the undercover guitar wizard, meet, sparks fly in more ways than one. They spend their time alternating between making out and driving each other crazy. But their summer adventures of skinny dipping, storm watching, and stolen kisses are brought to a halt when tragedy strikes.

Suddenly, they’re on opposite sides of the country, just when they need each other the most. Can Marti survive life with her dad and his vicious girlfriend? Will Adam get so fed up with his over-managed life and controlling parents that he quits the band?

Snapshot. A moment in time that changes two people forever.

Camp Hiawatha is based on a real camp located in Northern Wisconsin in a little town called St. Germain. It is a magical setting where eagles soar, loons sing and deer meander. Here are a few pictures from a recent trip. I hope it lives up to what you imagined.

The long path to the cabins

The volleyball court where Marti and Adam play 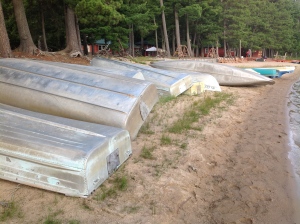 Marti and Adam pick a canoe 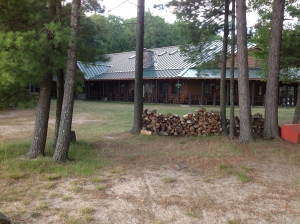 The lodge where they eat their meals

The seat where Marti waits with Adam for a ride that doesn’t come.

“Can I ask a question? Without you getting mad?” Adam asked.

“Depends. Is it going to be a stupid question?” She smirked, knowing her words would annoy him.

“From your point of view, everything I say is stupid,” he answered.

“You didn’t have to agree. That was your chance to say, ‘No, I think you’re brilliant and witty.’”

“Nah, I wouldn’t want to lie.” She heard Adam chuckle.

“Okay, risking my fragile ego, and taking the chance that I’ll be crushed by you once again, here goes. I know your dad was far from a stellar parent, but didn’t you ever see the genius side of him?”

She lifted her paddle and turned in her seat. “Seriously! After the things I told you, you’re going to be like everyone else and go, ‘Oh, but he’s so talented. He’s an icon. He’s a frickin’ master of his craft!’” Marti mimicked the words.

“I’ll take that as a no. You are not ready to talk reasonably without flying into a rage.”